2017 Volunteer of the Year awarded

It has become part of TransCares’ festivities to announce the Pam Moscatt Award of Excellence Volunteer of the Year at the Volunteer Christmas Party. 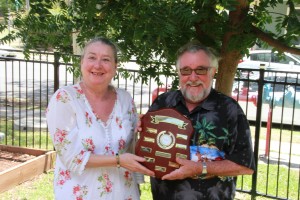 However, in 2017 there was a small break to the norm. Unable to decide between two standout volunteers, Anne Piemonte and Denis White will share this year’s plaque.

“They are both fantastic, we just could not decide between the two,” Samm Turri, care coordinator said.

“All of our volunteers do such a fantastic job, but Anne and Denis go above and beyond.

“They both are involved with a number of our services, including long and short distance transport, Wheels to Meals, TransClub, and Meals on Wheels.”

The announcement was met with cheers from fellow volunteers at the Denman Hotel on Wednesday 6th December where they enjoyed lunch and shared in some Christmas spirit.

The Volunteer of the Year award has been dedicated to Pam Moscatt since 2010 Alan Gordon, TransCare CEO said.

“Pam looked after Meals on Wheels and our social support services,” he said.

“She was very involved with our volunteers during her time with us, and she had such a great rapport with them it only seemed right to award the Volunteer of the Year in her honour after she passed away.”

TransCare would love to hear from anyone who is interested in coming on board as a volunteer. We are happy to work with people to suit their availibility, please contact the office on (02) 6545 3113, or pop in to the office at 214 Kelly Street Scone to find out more.